A Call to Action Needed to Improve Manpower in Nephrology

“Doctors Going Broke,” read a CNN headline on Jan. 5. Similar stories appeared in The New York Times and other national publications. One cannot say that broke is the right term for an occupation that averages in excess of $200,000 (primary care) or more than $350,000 (specialty incomes) a year, four to seven times the per capita national average. However, you only need be in practice to recognize the difficulties physicians are dealing with financially.

Nephrology is in the unique situation of being heavily dependent on a single-payer, the Centers for Medicare & Medicaid Services. Thus nephrologists are at a significantly higher risk of being financially impacted by government policy (only geriatric medicine has a higher percentage). This is nothing new; the risks have been the same for the past 40 years and the results have been mixed. What makes today different is that changes are underway in several forms of policy that can significantly impact nephrologists’ incomes over the coming years. 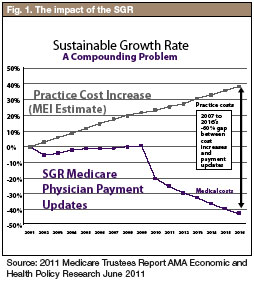 Number one continues to be the constant threat of Congress’s inability to deal with the sustainable growth rate (the so-called Doctor Fix). Thirteen times over the past 10 years Congress has attempted ways to fix this problem unsuccessfully. With the latest extension running out on March 1, a special bipartisan legislative committee met for the first time on Jan. 24 to try and put together a deal. While conferees from both parties have made it clear that they intend to extend the hold on the SGR, there is wide disagreement on how long the provision should be extended and how it will be paid for. House Democrats have indicated that they may prefer a one-year extension, while House Republicans have been pushing for a two-year solution similar to the one they passed in December. The bill the House passed in December cuts payments to several programs in order to pay for the SGR fix, including reducing payments to hospitals and reductions in Medicare bad debt reimbursement. These offsets would likely be opposed by Senate Democrats, who recently have endorsed the idea of using savings that resulted from troop withdrawals in Iraq and Afghanistan to cover the cost of stabilizing the Medicare payment rate. If the conferees fail to reach an agreement on an SGR fix by the beginning of March, physician reimbursements will be cut by 27.4%. All this turmoil has resulted is a constant uncertainty that creates an environment of inaction and delays. As the years go by, the cost to fix this problem continues to increase, with current estimates anywhere from $350-$400 billion to pay for the appropriate adjustments. The direct impact on nephrologists if this is not fixed will be substantial; a 27.4% cut in Medicare to a specialty that is heavily dependent (approximately 62%) on Medicare would impact most practice revenues with a decrease of close to 20%. Correlating that with the increase in the cost of running a practice, which has seen a 30% rise over the past 10 years, leaves being in a practice quite costly. Even if you can control your practice expenses it will be inevitable that physician compensation will take the largest hit.

Number two on our list is the potential impact Accountable Care Organizations will have on nephrology. The way things stand today, nephrologists would not be considered primary care physicians and thus would not qualify as the point person in the development of these programs. Who would be? The way the law is currently written, it would be many of the same primary care physicians that are holding off on referring their stage II and stage III chronic kidney disease patients to you. If the referrals slow down as a result of primary care physicians wanting to maintain control (and keeping the dollars in house), it will impact both nephrologists’ income and the patient’s well-being. You’ll get sicker patients from a new health care system that is supposed to promote holistic care, because financial incentives will entice primary care physicians to keep you out of the process longer. Under Accountable Care Organization regulations, the quality measures also make it difficult for nephrologists to keep their patients outcome levels in line with those that will be applied by CMS. This selective inefficiency has the potential to mean fewer dollars as well.

When CMS implemented G codes (since updated to 90960-90962) in 2004 to pay nephrologists based on patient visits in the unit, they in essence created a vehicle to generate additional practice revenues for doing what nephrologists were supposed to be doing anyway. But it also created an ‘out’ by reducing the number of times the physician actually needs to see the patient in the unit (rules varies by state, but at least 1-2 times per month). Physician practices have hired extenders to cover the visits. It costs the practice less than if they were to hire another nephrologists to meet the demands. From a purely business perspective, that is the logical response: keep your employee costs lower and still increase your revenues by maximizing your patient interactions in the units. These practices have potentially cleared the way for CMS to reduce the direct interactions that the nephrologists need to see patients in the unit overall. By taking the realistic viewpoint that efforts are continually being made to reduce health care expenditures in this country, it is not far-fetched to see CMS putting that responsibility strictly on extenders at a significantly reduced reimbursement rate (because they can) and reduce the nephrologists role in the clinics to being reimbursed on an as needed basis in the unit (exclusive of Directorships). Currently approximately 35-40% of most practice revenues currently generated comes from the Medicare capitated payment. Although the whole percentage would not be lost, a significant amount of those revenues would be diminished under this scenario. One only must look at what the expansion of managed care did to physicians incomes in the 1980s and 1990s and their reduction in reimbursement once the managed care organization had enough penetration in their markets to validate this premise.

Nephrologist breathed a sigh of relief, as did dialysis providers, when CMS listened to the renal community and made the new Prospective Payment System more accommodating. Had CMS not upped its original proposed rate, a significant number of dialysis units could have been easily slated for closure. Although not a direct hit to the nephrology practice revenues (unless the practice was joint ventured or owned the unit), the elimination of those facilities would represent someone not getting a Medical Directorship and therefore not see that income. The bundle numbers are going to be reviewed and adjusted by CMS in 2014. 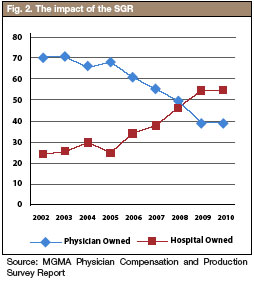 According to the Medical Group Management Association 55% of physician practices in all specialties are now owned by hospitals. Does that mean this is what you can look forward to in the future? According to a survey conducted in September 2010 by Health Media, they interviewed Hospital CEOs and found that only 8% would consider purchasing a nephrology practice. It is one of the lowest in the rankings. However if you look at it from the hospital’s perspective, what are the incentives? They will eventually have the patient admitted anyway as most dialysis patients have other factors that will require hospitalization. If the hospital doesn’t own the dialysis unit, they’re not seeing the revenues from that and thus no incentive is there.

These points are not being brought up to focus on the doom and gloom, but rather to bring the reader to the realization that now is the time to act. It’s easy to sit back and let things happen, but history has shown that when one does that, things usually do not happen that are going to make your lives better. We continue to work harder to make the same or less, is a mantra we all hear in all occupations. Physicians are in the unique position of having these issues at the forefront of future government policy. To sit back and let others deal with it when the potential long-term impact is so negative requires one to assess priorities.

The future rests on the actions we take today. We are running out of time to think about what should be done or needs to be done. We have to get it done. One can use organizations such as Renal Physicians Association, the American Society of Nephrology or the National Kidney Foundation; they have advocacy arms that work on our behalf.

But is that really enough? The stakes are too high. A grassroots effort among nephrologists, their patients and families and those organizations with connections to the renal arena must become vocal and contact their legislators and make them aware of the ramifications that these potential policies will have to the quality of care provided to patients and the increased costs that will result (to say nothing of the impact on incomes). Nephrologists are the experts when it comes to taking care of your patients, to allow that to be taken away through the well meaning but not necessarily best-intentioned Congress would be a mistake. Time is running out.

Mr. Osinski, a member of NN&I's Editorial Advisory Board, is president of the recruiting firm NephrologyUSA (nephrologyusa.com), a division of American Medical Consultants Inc. He is based in Miami, Fla.