Interventional nephrology has emerged as one of the fastest-growing areas in nephrology. The concept of getting patients what they need quickly and on an outpatient basis is extremely attractive. "One can have a problem with a patient in the unit in the morning, bring them to the access center and they can be back later in the day getting dialysis," one physician practice administrator told me.

As a physician recruiter, I'm often asked about the net worth of an interventionalist in a physician practice. Established nephrology practices that are looking at developing an interventional component can do so in a number of ways. A management company can train a nephrologist to perform interventional procedures for a percentage of the income over a number of years. Or, the practice can develop its own program-an expensive option, but the profits remain in-house.

The 15 academic programs offer interventional training at a variety of levels. In some cases it is included as part of the fellowship training; in others it is an adjunct to the training, or a separate mini- or full-year fellowship is offered. Five for-profit companies, through both onsite and offsite education programs, provide training that will qualify physicians for certification with the ASDIN.

How should a nephrologist with interventional training be paid? This is dependent on the makeup of the physicians in the practice group and how they value their time and services. A common viewpoint held by many of the group practices is that the patients forwarded on to an interventionalist come from the group and would not be referred if not for their efforts. Therefore, they should all be paid equally. Many of the management companies and dialysis companies support this thinking.

Interventionalists might take a different approach: "We are taking on the liability risks, we have to go for the extra training, we deal with the highly technical procedures that you cannot do, and therefore we are entitled to higher compensation and ownership opportunities."

There are other factors that can affect compensation.

All these factors ultimately play a role in compensation to the physician.

The average annual compensation for nephrologists, according to the Renal Physicians Association's 2005 Nephrology Practice Business Benchmarking Survey (the most recent data available) is $282,280. The 2008 Physician Compensation and Production Survey from the Medical Group Management Association (using 2007 data) shows the mean annual compensation for a FTE nephrologist is $305,602; median compensation is $299,121. Those salaries range from physician practice partners to first-year members. Unfortunately, there is no way to determine how many of the practices that responded to the surveys had interventional components to them. It should be noted, however, that the makeup of respondents to the MGMA survey represents larger practices, primarily multispecialty groups and a few larger single specialty groups, which would be more apt to have an interventional program in place.

The 2008 MGMA median compensation for a nephrologist in a single specialty group was $308,943 versus $297,513 in a multi-specialty group. The single specialty groups that responded had an average of 7.11 physicians per group. According to the RPA Benchmarking Survey, only 26.41% of practices had greater than seven physicians, which would reinforce the assumption that some of the MGMA respondents, due to size of their practice, probably had an interventional component and therefore represented the higher compensation numbers.

In speaking with three of the five largest nephrology practices in the United States, all of the nephrologists that are doing interventional procedures only do it part of the time, and spend the rest of the time seeing patients as part of general nephrology, including providing call and hospital rounding. It is my understanding that the other two groups in the top five also work under the same formula.

Lifeline Vascular Access trains physicians in the practices they are working with. The vast majority of their groups work under a similar financial arrangement.

In discussions with several smaller practices in the 8 to 10 physician size category, they had one or two of the practices' nephrologists trained outside of the practice (usually for three to six months), and then had them come back to establish the practice's interventional programs. In all cases, the physicians doing the interventional procedures are also sharing in hospital rounds and consults, seeing patients in the office and (except for one practice interviewed) are doing dialysis rounding (and that will be changing to include the practice noted above as well).

Among the practices interviewed, the interventional nephrologists were spending anywhere from 25% to 53% of their time in the access centers. In these practices, all income was split equally among all partners or shareholders in the practice. They have seen an increase in compensation for all members of the group, anywhere from 20% to 35%-depending on the success of the access center. 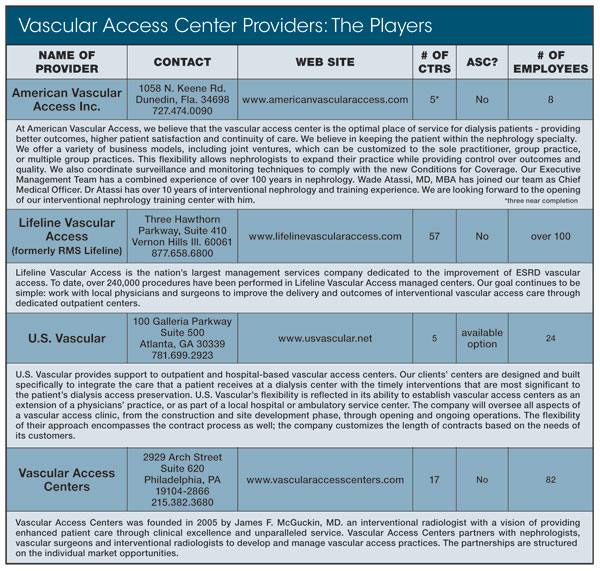 In addition to the VAC providers (see chart), there are a number of independent practices that have opened or are opening their own access centers. If they are not training from within, they identify a physician with previous interventional training. They are potentially more valuable to the group (especially if they are in the process of establishing a vascular access program). In these instances, the interventional nephrologist is more apt to see a higher starting salary, a different production formula and, in some cases, potential ownership interest in the access center. Based on discussions with recruiters from dialysis providers DaVita Inc., Fresenius Medical Care, and other recruiting firms, starting salaries in these cases tend to be higher (i.e., $25,000 to $100,000 more) than the average starting salary for a general nephrologist, who will make an income of $179,474 mean and $180,000 median coming out of fellowship. (Source: National Association of Physician Recruiters/Medical Group Management Association, Physician Placement Starting Salary Survey, USA, 2008). It is important to note that the previous numbers include several interventional start-up salaries and hospital income guarantees, which skew the numbers to the high side.

In speaking with the president of a small vascular access company, they start physicians with interventional training at a salary of $300,000 a year in a small center (average of four procedures a day) and $400,000 for someone in a larger center (six or more procedures a day). In addition, they also anticipate the physician negotiating for ownership in the center, which can generate another $100,000 to the physician.

It is impossible to predict the future in health care; however, it is reasonable to expect that if the bulk of practices with an interventional component are sharing revenue equally, they will begin to see a strain on the practice as demands for these services grows. Unless the supply of interventional nephrologists continues to expand quickly enough to keep pace, the laws of supply and demand will impact future compensation.

If incentives remain for independent practices to open access centers, they will either be training their own or looking outside to recruit nephrologists with interventional experience to get their facilities operational. This will create a competitive environment that should force salaries upward. It should be noted, however, that Medicare payment for interventional procedures have dropped as much as 13% for 2009 (see the Renal Politics section on p. 21 for more details), and some expect more cuts over the next five years.

Nephrology is a specialty that is heavily dependent on a single payer, so competitiveness will be limited by reimbursement.

Mr. Osinski is the president of NephrologyUSA, a division of American Medical Consultants Inc., based in Miami. He is also an NN&I Editorial Advisory Board member.